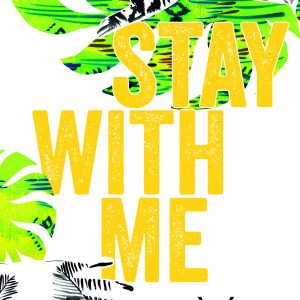 Stay With Me: A Review

Title: Stay With Me

It was much easier to be a father after three bottles of beer.

Ayobami Adebayo’s debut novel, Stay With Me is a story full of poignant contradictions.Yejide and Akin are married in 1980s Nigeria, an educated couple seemingly unfettered by conservative tribal expectations.Yejide and Akin promise each other that they will be in a monogamous relationship. But their younger years are clouded by naiveté, and soon the inescapable burdens of societal expectations are the millstones around their necks.

Told between 1985 and 2008, we are initially introduced to a couple who are living the boilerplate African dream; they have a couple of cars, a house with a watchman at the gate and in-laws who are impressed when they speak English. However, Yejide is barren. Her in laws after two years of impatient expectation , have a brought Akin a new wife; a polite and ingratiating ‘yellow woman’ ready to do what Yejide cannot.

Yejide is portrayed as a strong independent woman but when she is faced with the possibility of being in a polygamous relationship, succumbs to superstition. Her desperation leads her to the Mountain of Jaw dropping Miracles where she breastfeeds a white goat in order to get pregnant.

Adebayo’s novel is an exemplary debut that tries to explore the nature of human love; its capacity to hurt and blind, the heavy burden of gendered expectations that make some women prepare rooms for their husband’s second wife and make some men keep secrets so big that they unleash a chain reaction that destroy everything in its path.

A page turner, Stay With Me is written in simple prose that tells with an almost nonchalance acceptance of the weighty issues it addresses. It does not seek to redeem its characters but shows their flaws, the contradictory lives they lead and their almost superhuman ability to attract bad luck.

Soft Magic: A Review
A Review of David Branch’s Kenya: Between Hope And Despair, 1963-2011