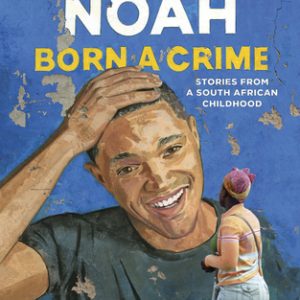 Born a Crime: A Review

Title: Born a Crime: Stories from a South African Childhood

Trevor Noah’s autobiography Born A Crime is as much a history of modern South Africa as it is Trevor’s story. That he starts and ends with two traumatizing events, one where his mother threw him out of a moving car and the other where she was shot, tells you this is her story too. Mostly.

It’s a story brilliantly and often hilariously told. Born a Crime is Trevor on a different kind of stage, weaving his life story into comedy that’s (sometimes morbidly) funny and powerful. This is him using material from his own story to teach little lessons that he’s learnt being born half-and-half in a country in transition. It’s him on stage, this time in print, doing stand-up comedy where he has a lot more creative control, and a lot less The Daily Show.

He says little about his life in comedy actually, and why he chose it (he did a documentary on this though). He almost runs away from it and focuses mostly on the first two decades of his life. In it we see apartheid for what it was through the Noahs, and we see a rebellious and optimistic South Africa through Patricia, Trevor’s mum, despite what the present may be.

It all starts with, as the title suggests, his being born a crime. Trevor talks about the pain and struggle that have shaped his life’s trajectory. He talks about his childhood and youth, and crime. He talks a lot about his mom (just as he often does on stage), the singular force that has shaped his life. How she gave him an English name so he would be “beholden to no fate.” How her mastery of language, and insistence that he learn English first, defined his life and how he tried to fit in. How her deep Christianity meant three churches every Sunday, and several prayer meetings during the week. How she was shot in the head by her ex-husband and miraculously survived.

If you’ve followed Trevor’s career, he has told most of these stories on stage in his specials. But there’s something different, and profound, about seeing them in print.

My major problem with Born a Crime is that it’s clearly written for an American audience. The little comparisons and the allusions in prose are enough to tell you who the primary audience is. Trevor retains his authenticity as a South African storyteller, yes, but he panders too much to North American readers. This might be, as one reader on Instagram pointed out, because they need to understand him now more than we do. We’ve been gobbling up Trevor Noah’s stand-up comedy with a fervent passion long before he took over the Daily Show desk.

Because he’s still a young comedian with a lifetime of experiences ahead, Born a Crime is incomplete. Still, it’s a magnificent and funny story worth every word it’s built on. As far as mid-career memoirs go, in exposing the rawness of the personal story, this one comes highly recommended.