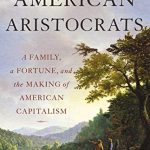 American Aristocrats is a multigenerational biography of the Andersons of Kentucky, a family of strivers who passionately believed in the promise of America. Beginning in 1773 with the family patriarch, a twice-wounded Revolutionary War hero, the Andersons amassed land throughout what was then the American west. As the eminent religious historian Harry S. Stout argues, the story of the Andersons is the story of America’s experiment in republican capitalism. Congressmen, diplomats, and military generals, the Andersons enthusiastically embraced the emerging American gospel of land speculation. In the process, they became apologists for slavery and Indian removal, and worried anxiously that the volatility of the market might lead them to ruin.

Drawing on a vast store of Anderson family records, Stout reconstructs their journey to great wealth as they rode out the cataclysms of their time, from financial panics to the Civil War and beyond. Through the Andersons we see how the lure of wealth shaped American capitalism and the nation’s continental aspirations.