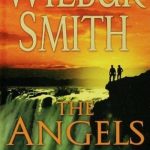 In The Angels Weep by Wilbur Smith, on a continent of breathtaking beauty and bitter suffering, two vastly different cultures clashed, mingled, and recoiled. Here, amidst mist-shrouded mountains and gold-studded plateaus, ancient tribesmen lived close to the earth, as white men dug fortunes out from beneath them and laid plans for a new civilization.

Out of Southern Africa the enigmatic Cecil Rhodes built an empire in the late 1800s and attracted the brightest and bravest of a generation–including a remarkable far-flung family named Ballantyne. But for the natives, another day was dawning: a day of retribution…

From a courageous woman doctor to a fierce, one-eyed slave trader turned soldier, the whites of Africa were buffeted by two horrific waves of war. And just when a bloody peace seemed possible, the seeds of future turmoil were sown …