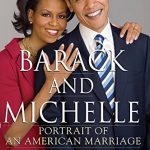 They exploded onto the national political scene in 2004 and within four years captured the ultimate prize. In so doing, they became a First Couple like no other: he the biracial son of a free-spirited Midwesterner and her brilliant-but-troubled Kenyan husband, raised in Hawaii and Indonesia; she brought up on Chicago’s hardscrabble South Side by working-class African American parents who sacrificed so she could achieve her dreams of an Ivy League education and a job at one of America’s top law firms.

By the time they claimed the White House in one of the most hotly contested presidential races in modern history, Barack and Michelle Obama were seen by millions around the world as the new Jack and Jackie Kennedy – brilliant, attractive, elegant, youthful and exciting. The marriage of Barack and Michelle stands as one of the great personal and political partnerships, and by the time he was sworn in, Barack and Michelle Obama were indisputably the First Couple not only of America but of the world. Yet, incredibly, the true nature of that relationship has remained a mystery. Until now.

Christopher Andersen draws on those who know the Obamas best to examine in detail the unique partnership and the grace, courage and humour that defines it. An inspiring, sympathetic and compelling look at two remarkable individuals, Barack and Michelle is, above all else, a revealing and stirring love story.