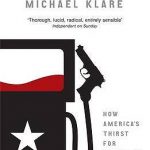 Blood and Oil: The Dangers and Consequences of America's Growing Petroleum Dependency

Blood and Oil: The Dangers and Consequences of America’s Growing Petroleum Dependency

Since September 11th 2001 and the commencement of the ‘war on terror’, the world’s attention has been focused on the relationship between US foreign policy in the Middle East and the oceans of crude oil that lie beneath the region’s soil.

Michael Klare traces oil’s impact on international affairs since World War II, revealing its influence on the Truman, Eisenhower, Nixon and Carter governments. He shows how America’s own wells are drying up as demand increases and warns that by 2010 the US will need to import 60% of its oil. And since most of this supply will have to come from chronically unstable, often violently anti-American zones – the Persian Gulf, the Caspian Sea, Latin America and Africa – their dependency is bound to lead to recurrent military involvement.