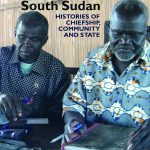 DEALING WITH GOVERNMENT IN SOUTH SUDAN

DEALING WITH GOVERNMENT IN SOUTH SUDAN

he creation of Africa’s newest state, South Sudan, in 2011, involved national and international recognition of “traditional authorities”, or chiefs. Chiefship has often been misunderstood to be a timeless or non-state institution, but this book argues for the mutual constitution of chiefship and the state since the mid-nineteenth century, based on research in the vicinity of three towns. The book also demonstrates that while South Sudanese towns have previously been analysed as centres of alien state power, people came to the urban “frontier” to seek the resources, regulation and justice of the state. Located conceptually – and sometimes spatially – upon this frontier, chiefship became central to local relations with the state, and to state definitions of the local. The book thus addresses broader debates over the role of traditional authorities and the nature of urban-rural and state-society relations in Africa. Cherry Leonardi is a Senior Lecturer in African History at Durham University, a former course director of the Rift Valley Institute’s Sudan course, and a member of the council of the British Institute in Eastern Africa Published in association with the British Institute in Eastern Africa.