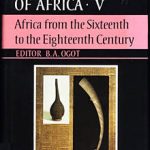 Volume V of the UNESCO General History of Africa covers the history of Africa from the beginning of the sixteenth century to the close of the eighteenth century. Two major themes emerge: first, the continuing internal evolution of the states and cultures of Africa during this period; second, the increasing involvement of Africa in external trade- with major but then unforeseen consequences for the whole world.

In North Africa, we see the Ottomans conquer Egypt and establish Regencies in Tripoli, Tunis and Algiers. South of the Sahara, some of the larger, older states collapse (Songhay, Western Sudan, Christian Ethiopia), and new power bases emerge (Asante, Dahomey, Sakalava). Highly centralized political and administrative structures develop and societies with distinct social classes and, often, a strongly feudal character. Traditional religions continue to coexist with both Christianity (suffering setbacks) and Islam (in the ascendancy).

Along the coast, particularly of West Africa, Europeans establish a trading network which, with the development of New-World plantation agriculture, becomes the focus of the international slave trade. The immediate consequences of this trade for Africa are explored, and it is argued that the long-term global consequence include the foundation of the present world-economy with all its inbuilt inequalities.

Each chapter is illustrated with black and white photographs, maps and figures. The text is fully annotated and there is an extensive bibliography of works relating to the period, as well as a comprehensive glossary.