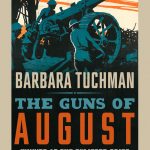 Guns of August, The

Guns of August, The

Barbara Tuchman’s The Guns of August is a spellbinding history of the fateful first month when Britain went to war.

Barbara Tuchman’s universally acclaimed, Pulitzer prize-winning account of how the first thirty days of battle determined the course of the First World War is to this day revered as the classic account of the conflict’s opening. From the precipitous plunge into war and the brutal and bloody battles of August 1914, Tuchman shows how events were propelled by a horrific logic which swept all sides up in its unstoppable momentum.

Barbara Tuchman achieved prominence as a historian with The Zimmerman Telegram and international fame with the Pulitzer-Prize winning The Guns of August. She is also the author of The Proud Tower, Stilwell and the American Experience in China (also awarded the Pulitzer Prize), A Distant Mirror and The March of Folly. She died in 1989. The Proud Tower and The Zimmerman Telegram are published by Penguin.