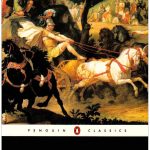 An ancient Greek epic which underpins the whole of western literature, Homer’s The Iliad is a timeless evocation of the struggle to retain a sense of honour and virtue amidst the horrors of war. This Penguin Classics edition is translated with an introduction by Martin Hammond.

The Iliad is the greatest literary achievement of Greek civilization. The story centres on the critical events in four days of the tenth and final year of the war between the Greeks and the Trojans. It describes how the quarrel of Agamemnon and Achilleus sets in motion a tragic sequence of events, which leads to Achilleus’ killing of Hektor and determines the ultimate fate of Troy. But Homer’s theme is not simply war or heroism. With compassion and humanity he presents a universal and tragic view of the world, of human life lived under the shadow of suffering and death, set against a vast and largely unpitying divine background. The Iliad is the first of the world’s great tragedies.

Martin Hammond’s acclaimed translation is accompanied by a full introduction and a comprehensive index.

Seven Greek cities claim the honour of being the birthplace of Homer (c. 8th-7th century BC), the poet to whom the composition of the Iliad and Odyssey are attributed. The Iliad is the oldest surviving work of Western literature, but the identity – or even the existence – of Homer himself is a complete mystery, with no reliable biographical information having survived.

‘Martin Hammond’s modern prose version is the best and most accurate there has ever been’
Peter Levi, Independent

‘A fine Iliad for our times’
Philip Howard, The Times