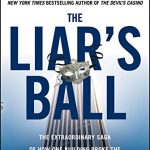 Liar's Ball: The Extraordinary Saga of How One Building Broke the World's Toughest Tycoons

Liar’s Ball: The Extraordinary Saga of How One Building Broke the World’s Toughest Tycoons

The secret history of America’s real estate barons and the empires they created Written by “Vanity Fair” investigative reporter and bestselling author, Vicky Ward, this enthralling expose delivers the inside scoop on some of history’s most famous (and infamous) real estate dynasties. It is the story of men with outsized dreams and egos to match who were willing to go to any lengths to amass vast fortunes through land speculation. With novelistic flare, Ward describes how those men’s ambitions made them the Kings of America, larger-than-life representatives of the American Dream, but how their fortunes rarely bought them the one thing they craved more than gold–acceptance among America’s social elite, the often penniless WASP descendants of the founding families.An captivating history of the greatest American real estate barons and their scions, including everyone from the Astors and Rockefellers to the Trumps and Zeckendorffs Includes fascinating, little-known details about how the dynasties began, how they amassed their great wealth, and how, from one generation to the next, those fortunes were either expanded or squandered