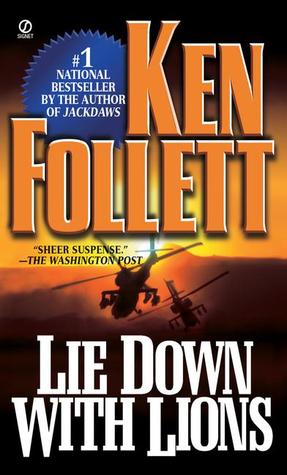 Lie Down With Lions

Jane, a brave and sensual Englishwoman, is caught in a deadly romantic triangle between rival spies Ellis and Jean-Pierre. Love, hatred and deception sweep them from terrorist conspiracies in Paris to full-tilt guerilla warfare in Afghanistan.
Jean-Pierre and Jane marry and go to work as doctors in the Valley of the Five Lions to help the rebels fighting for their freedom against the Russians. Trapped between extremes of violence, lust and danger, Jane desperately tries to get out of the line of fire. Help comes unexpectedly, from her husband’s greatest enemy. They soon become the centre of the action, as treachery seeks its prey. Follett builds the menacing tension to breaking point, leading to a confrontation that echoes all our nightmares.