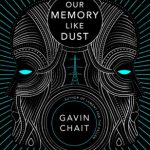 Why do we tell stories? To hold on to what has been loved and lost, to create new myths, to explain and teach in ways that seep into memory.
Shakiso Collard leads the evacuation from Benghazi as jihadis overwhelm the refugee camp where she works. On arrival in Paris, she is betrayed by her boss, Oktar Samboa, and watches in despair as those she illegally helped escape are deported back to the warzones of Libya.
Elsewhere, Farinata Uberti – strongman CEO of Rosneft, the world’s largest energy company – arrives in London after triggering a violent insurrection in Tanzania to destroy a potential rival in the oil market. In the Sahara, an air convoy on its way to deliver billions of dollars of drugs and weapons to Ansar Dine jihadis crashes and is lost.
A year later, having spent months in hiding, Shakiso travels to West Africa. She is there to lead the relief effort that are hoping to stop the 200 million refugees fleeing war and environmental collapse heading for a fortified and fragmented Europe.
As the myths of these millions seeking new lives across the Mediterranean intrude into reality, Shakiso is drawn into the brutal clandestine fight against Rosneft’s domination of European energy supplies being conducted by the mysterious Simon Adaro. And, deep within the disorienting Harmattan storms of the desert, a group of jihadis have gone in search of the crashed convoy of planes – and a terror that could overwhelm them all.