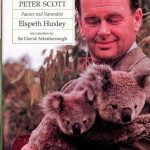 Described as the “father of conservation,” Peter Scott led a crusade for endangered wildlife that captured the imagination of an entire generation and inspired many people to care about animals and their natural environments long before it was fashionable to do so. Behind Scott’s charm and single-minded devotion to his chosen causes lies a complex character. Elspeth Huxley has written a wonderfully rich and readable biography, which will be important to anyone interested in the conservation of wildlife and the earth.