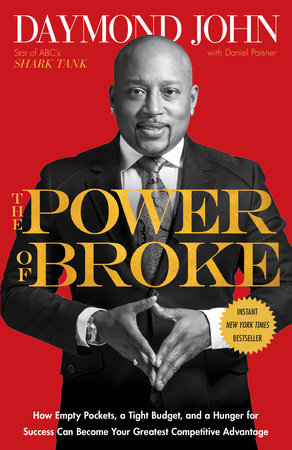 Power of Broke: How Empty Pockets, a Tight Budget, and a Hunger for Success Can Become Your Greatest Competitive Advantage

The instant New York Times bestseller from Shark Tank star and Fubu Founder Daymond John on why starting a business on a limited budget can be an entrepreneur’s greatest competitive advantage.

Daymond John has been practicing the power of broke ever since he started selling his home-sewn t-shirts on the streets of Queens. With a $40 budget, Daymond had to strategize out-of-the-box ways to promote his products. Luckily, desperation breeds innovation, and so he hatched an idea for a creative campaign that eventually launched the FUBU brand into a $6 billion dollar global phenomenon. But it might not have happened if he hadn’t started out broke – with nothing but hope and a ferocious drive to succeed by any means possible.

Here, the FUBU founder and star of ABCs Shark Tank shows that, far from being a liability, broke can actually be your greatest competitive advantage as an entrepreneur. Why? Because starting a business from broke forces you to think more creatively. It forces you to use your resources more efficiently. It forces you to connect with your customers more authentically, and market your ideas more imaginatively. It forces you to be true to yourself, stay laser focused on your goals, and come up with those innovative solutions required to make a meaningful mark.

Drawing his own experiences as an entrepreneur and branding consultant, peeks behind-the scenes from the set of Shark Tank, and stories of dozens of other entrepreneurs who have hustled their way to wealth, John shows how we can all leverage the power of broke to phenomenal success. You’ll meet:

· Steve Aoki, the electronic dance music (EDM) deejay who managed to parlay a series of $100 gigs into becoming a global superstar who has redefined the music industry
· Gigi Butler, a cleaning lady from Nashville who built cupcake empire on the back of a family recipe, her maxed out credit cards, and a heaping dose of faith
· 11-year old Shark Tank guest Mo Bridges who stitched together a winning clothing line with just his grandma’s sewing machine, a stash of loose fabric, and his unique sartorial flair

When your back is up against the wall, your bank account is empty, and creativity and passion are the only resources you can afford, success is your only option. Here you’ll learn how to tap into that Power of Broke to scrape, hustle, and dream your way to the top.