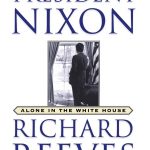 Who was Richard Nixon? The most amazing thing about the man was not what he did as president, but that he became president at all. Using thousands of new interviews and recently discovered or declassified documents and tapes, Richard Reeves’s President Nixon offers a surprising portrait of a brilliant and contradictory man.
Even as he dreamed of presidential greatness, Nixon could trust no one. His closest aides spied on him as he spied on them, while cabinet members, generals, and admirals spied on all of them — rifling briefcases and desks, tapping each other’s phones in a house where no one knew what was true anymore. Reeves shows a presidency doomed from the start by paranoia and corruption, beginning with Nixon and Kissinger using the CIA to cover up a murder by American soldiers in Vietnam that led to the theft and publication of the Pentagon Papers, then to secret counterintelligence units within the White House itself, and finally to the burglaries and cover-up that came to be known as Watergate. President Nixon is the astonishing story of a complex political animal who was as praised as he was reviled and who remains a subject of controversy to this day.