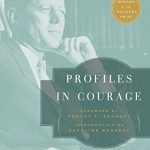 Written in 1955 by the then junior senator from the state of Massachusetts, John F. Kennedy’s Profiles in Courage served as a clarion call to every American. The inspiring true accounts of eight unsung heroic acts by American patriots at different junctures in American History, Kennedys book became required reading, an instant classic, and was awarded the Pulitzer Prize. Now, half a century later, it remains a moving, powerful and relevant testament to the indomitable national spirit and an unparalleled celebration of that most noble of human virtues.