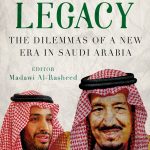 King Salman of Saudi Arabia began his rule in 2015 confronted with a series of unprecedented challenges. The dilemmas he has faced are new and significant, from leadership shuffles and falling oil prices to regional and international upheaval. Salman’s Legacy interrogates this era and assesses its multiple social, political, regional and international challenges. Whether Salman’s policies have saved the kingdom from serious upheaval is yet to be seen, but no doubt a new kingdom is emerging. This book offers historical and contemporary insights into the various problems that persist in haunting the Saudi state. Madawi Al-Rasheed brings together well-established historians and social scientists with deep knowledge of Saudi Arabia?its history, culture and contemporary politics?to reflect on Salman’s kingdom. They trace both policy continuities and recent ruptures that have perplexed observers of Saudi Arabia. This lucid and nuanced analysis invites serious reflection on the Saudi leadership’s capacity to withstand the recent challenges, especially those that came with the Arab uprisings. At stake is the future of a country that remains vital to regional stability, international security, and the global economy.