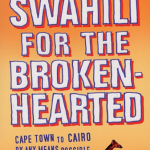 Swahili For the Broken Hearted

Swahili For the Broken Hearted

Question: What do you do when you’re dumped by the Girl Next Door?
Answer: Throw yourself into another madcap adventure and travel from Cape Town to Cairo…
A week after breaking up with the GND (his travelling companion through Central America) Peter Moore heads off to Africa to lose himself for a while. In the grand tradition of 19th-century scoundrelas, explorers and romantics, Africa strikes him as the ideal place to find solitude and anonymity in the face of a personal crisis.
What follows is Peter’s journey from one end of the Dark Continent to the other. Travelling the fabled Cape Town to Cairo route by any means of transport he can blag (or if he must, pay) his way onto, it’s an epic trek that sees our intrepid Antipodean experience everything from the southernmost city in Africa to the Pyramids, vast game parks and thundering falls, cosmopolitan cities and tiny villages as he journeys through the very heart of Africa. And travelling on his own, it’s inevitable that Peter falls in with a motley cast of characters and has a myriad misadventures: including coming face to face with a wild Hyena with very bad breath, crossing the treacherous Sani Pass, the highest in Africa, narrowly escaping a riot by hiding in a coffin shop, saving oil-covered Penguins in South Africa, acting as an extra in a WW2 epic, not to mention dodging 20,000 single woman trying to catch the eye of the king of Swaziland during the annual Reed Dance. And then there was the time when he was kicked out of Robert Mugabe’s birthday bash at gunpoint…