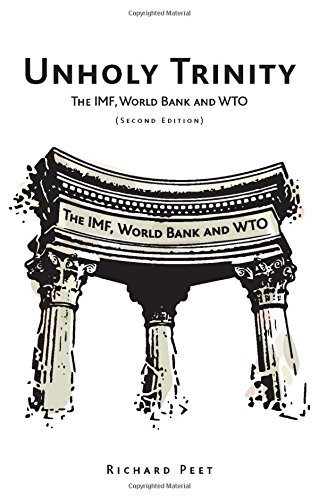 The answer is a triad of ‘governance institutions’ – The IMF, the World Bank and the WTO. Globalization massively increased the power of these institutions and they drastically affected the livelihoods of peoples across the world. Yet they operate undemocratically and aggressively promote a particular kind of neoliberal capitalism. Under the ‘Washington Consensus’ they proposed, poverty was to be ended by increasing inequality.

This new edition of Unholy Trinity, completely updated and revised, argues that neoliberal global capitalism has now entered a period of crisis so severe that governance will become impossible. Huge incomes for a small number of super-rich people produced an unstable global economy, rife with speculation and structurally prone to crises. The IMF is in disgrace, the WTO can hardly meet anymore and the World Bank survives as a global philanthropist. Is this the end for the Unholy Trinity?
Author: Richard Peet