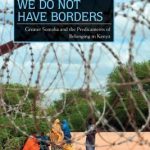 We Do Not Have Borders

We Do Not Have Borders

Though often associated with foreigners and refugees, many Somalis have lived in Kenya for generations, in many cases since long before the founding of the country. Despite their long residency, foreign and state officials and Kenyan citizens often perceive the Somali population to be a dangerous and alien presence in the country, and charges of civil and human rights abuses have mounted against them in recent years.

In We Do Not Have Borders, Keren Weitzberg examines the historical factors that led to this state of affairs. In the process, she challenges many of the most fundamental analytical categories, such as “tribe,” “race,” and “nation,” that have traditionally shaped African historiography. Her interest in the ways in which Somali representations of the past and the present inform one another places her research at the intersection of the disciplines of history, political science, and anthropology.

Given tragic events in Kenya and the controversy surrounding al-Shabaab, We Do Not Have Borders has enormous historical and contemporary significance, and provides unique inroads into debates over globalization, African sovereignty, the resurgence of religion, and the multiple meanings of being African.