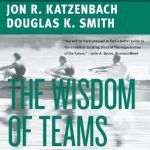 WISDOM OF TEAMS, THE

WISDOM OF TEAMS, THE

Teams — the key to top performance Motorola relied heavily on teams to surpass its competition in building the lightest, smallest, and highest-quality cell phones. At 3M, teams are critical to meeting the company’s goal of producing half of each year’s revenues from the previous five years’ innovations. Kodak’s Zebra Team proved the worth of black-and-white film manufacturing in a world where color is king.

But many companies overtook the potential of teams in turning around tagging profits, entering new markets, and making exciting innovations happen — because they don’t know how to utilize teams successfully. Authors Jon R. Katzenbach and Douglas K. Smith talked with hundreds of people in more than thirty companies to find out where and how teams work best and how to enhance their effectiveness. They reveal:

The most important element in team success

Why companywide change depends on teams … and more
Comprehensive and proven effective, The Wisdom of Teams is the classic primer on making teams a powerful tool for success in today’s global marketplace.