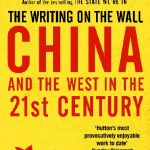 Writing On The Wall, The: China and the West in the 21st Century

Writing On The Wall, The: China and the West in the 21st Century

An incisive and thoroughly accessible account of China’s emergence as an economic power and its developing relationship with the West
China constitutes a fifth of the world’s population. Over the last twenty years its economy has doubled to make it the fifth largest economy in the world; if the pace is repeated over the next twenty it is set to become second only to the US. The speed of its development is stunning, a combination of cheap labour and commitment to science and technology that has never been matched by a developing country. The Pearl River Delta, Shanghai and Beijing have become city-regions whose growth and embrace of modernity strike the visitor with awesome force. This is a continent on the move, recovering the world position and wealth it once had.
The re-emergence of China as a superpower constitutes the biggest challenge the world has had for more than a century. Never before in modern times has the financial, trade, economic and diplomatic world pecking order been so profoundly reconstituted with the challenger country itself in the grips of incredible ideological and political change. This is a transition both internally in China and externally in the world beyond beset by hazard and risk. The world’s peace and prosperity depends upon it being executed successfully.