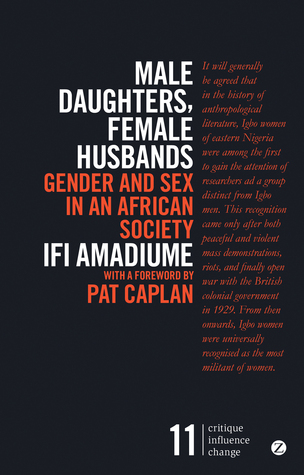 In 1987, more than a decade before the dawn of queer theory, Ifi Amadiume published the groundbreaking Male Daughters, Female Husbands to critical acclaim. This compelling, enduring, and highly original book argues that gender, as constructed in Western feminist discourse, did not exist in Africa before the colonial imposition of a dichotomous understanding of sexual difference. Amadiume examines the African societal structures that enabled people to achieve power within fluid masculine and feminine roles.

At a time when gender and queer theory is viewed by many as overly focused on identity politics, this apt text not only warns against the danger of projecting Western notions of difference onto other cultures, but also questions the very concept of gender itself. Essential reading for anyone involved in gender studies or anthropology, this outstanding new edition of Male Daughters, Female Husbands will be invaluable for the next generation of researchers.