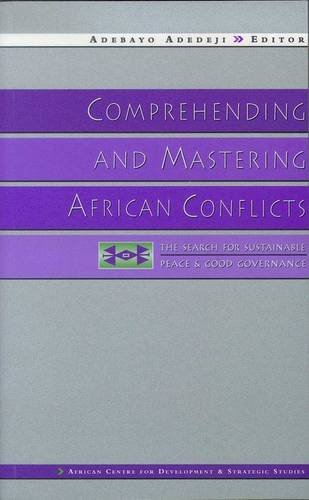 More and more African countries are falling prey to civil war and the disintegration of government authority and social order. Here, for the first time, teams of African scholars based in those countries principally affected examine what is happening. Their findings are only the first step in an ongoing, policy-relevant process of investigation and action. They share a belief that a development agenda designed to improve the lives of the people and strengthen national economies cannot be effectively pursued until the continent masters its problems of governance. The first aim of these scholars has been to understand the complex and diverse roots of the conflicts. To this end, they analyse a cross-section of such conflicts from various countries — Angola, Burundi and Rwanda, Liberia and Sierra Leone, Somalia and Somaliland. They also reflect more generally on the obstacles to comprehending conflict in Africa. Possible ways of anticipating, containing and indeed preventing new conflicts are discussed. The experience of successful transitions to peace are investigated in a number of cases, including Northern Mali and Nigeria after its civil war of 1967-70, as are issues such as the part played by NGOs in Rwanda and the role of regional and international cooperation. There is also much discussion of what new research is needed and proposals for mastering conflict in future. These range over a wide diversity of measures, including, for example, ideas like a moratorium on the importation of arms, trans-frontier development projects, political reform that creates real space for effective participation by different social groups, and governmental decentralisation. This volume, which is ACDESS’s first output under this research programme, represents a significant contribution by African intellectuals to resolving the most intractable problems confronting Sub-Saharan Africa. Its appearance could not be more timely.