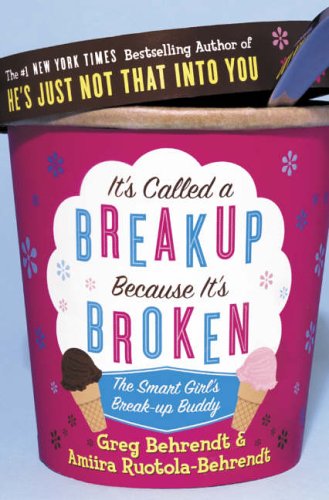 It’s Called A Break Up Because It’s Broken

The latest book by Greg Behrendt, author of the multi-million plus copy bestseller ‘He’s Just Not That Into You’, is another hilarious, wry and wise take on relationships and how to move on when one goes sour.

‘He’s Just Not That Into You’ is more than a book. It’s a revolution. The phrase, coined by Behrendt for an episode of ‘Sex and the City’, has now entered the language: it features in ads, it’s referred to in newspaper headlines and it has spawned spin-off spoof books and more.

‘It’s Called A Break-up Because It’s Broken’ promises to do this and more. It will help you get over anyone and move on. Behrendt’s voice is unique – combining tell-it-like-it-is advice with humour and the ‘guy’s eye view’. The book is filled with solid advice to help you let go of your ex – for example: ‘It’s 3 am, the bottle of wine is empty, do you really want to make that call?’

Each insightful chapter is complemented with a Q-and-A with Greg on what he’s thinking, case studies, and games. Greg and Amiira tackle tough issues such as break-up sex, how not to lose your friends during a break-up, and 10 great places to cry. It’s the ultimate read and reference for anyone who has ever been in a relationship.