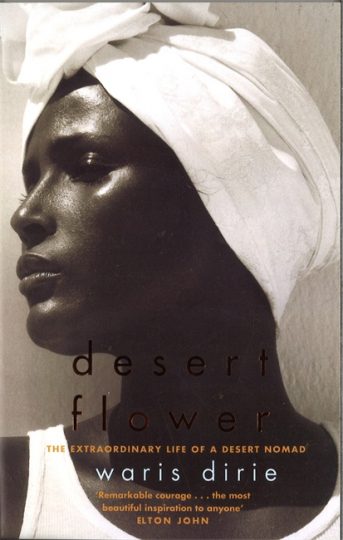 Inspirational, dramatic and extraordinary – the autobiography of a Somalian nomad circumcised at 5, sold in marriage at 13, who became an American model and is now at the young age of 30, the UN spokeswoman against circumcision
Waris Dirie (the name means desert flower) lives a double life – by day she is a famous model and UN spokeswoman on women’s rights in Africa, at night she dreams of her native Somalia. Waris, one of 12 children, was born into a traditional family of desert nomads in East Africa. She remembers her early childhood as carefree- racing camels and moving on with her family to the next grazing spot – until it came her turn to meet the old woman who administered the ancient custom imposed on most Somalian girls: circumcision. Waris suffered this torture when she was just five years old. Then, aged 12, when her father attempted to arrange a marriage with a 60 year old stranger in exchange for five camels – she took flight. After an extraordinary escape through the dangerous desert she made her way to London and worked as a maid for the Somalian ambassador until that family returned home. Penniless and speaking little English, she became a janitor in McDonalds where she was famously discovered by a fashion photographer. Her story is a truly inspirational and extraordinary self-portrait of a remarkable woman whose spirit is as breathtaking as her beauty.
Author: Waris Dirie