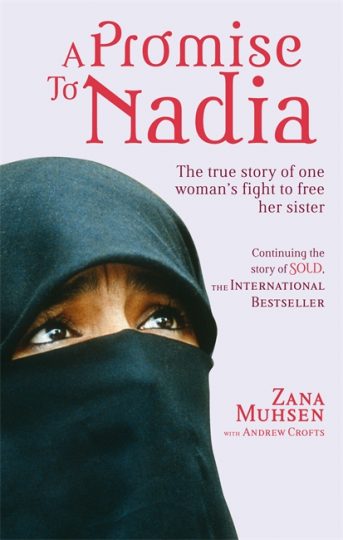 Moving true-life story of a young woman’s 10-year attempt to free her abducted sister from Yemeni slavery.
Ten years previously Zana Muhsen escaped from the life of slavery in the Yemen into which her father had sold her as a child bride, leaving behind her baby son, her sister Nadia, and Nadia’s two small children. As she described so powerfully in her internationally bestselling book SOLD, Zana made a solemn vow to Nadia that she would do everything she possibly could to obtain their freedom as well.

A PROMISE TO NADIA tells the extraordinary story of those ten years; of the family’s lone campaign against the Yemeni authorities; of the refusal of their own government in London to help; and of the despair that forced them into a desperate deal with an unofficial military-style organisation specialising in the recovery of abducted children.