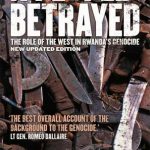 A PEOPLE BETRAYED: THE ROLE OF THE WEST IN RWANDAS GENOCIDE

A PEOPLE BETRAYED: THE ROLE OF THE WEST IN RWANDAS GENOCIDE

Events in Rwanda in 1994 mark a landmark in the history of modern genocide. Up to one million people were killed in a planned public and political campaign. In the face of indisputable evidence, the Security Council of the United Nations failed to respond.

In this classic of investigative journalism, Linda Melvern tells the compelling story of what happened. She holds governments to account, showing how individuals could have prevented what was happening and didn’t do so. The book also reveals the unrecognised heroism of those who stayed on during the genocide, volunteer peacekeepers and those who ran emergency medical care.

Fifteen years on, this new edition examines the ongoing impact of the 1948 Genocide Convention and the shock waves Rwanda caused around the world. Based on fresh interviews with key players and newly-released documents, A People Betrayed is a shocking indictment of the way Rwanda is and was forgotten and how today it is remembered in the West.