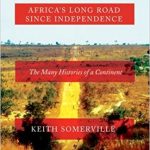 View cart “TEETH MAY SMILE BUT THE HEART DOES NOT FORGET,THE” has been added to your cart.

The story starts long before the granting of independence to Ghana in 1957, with pre-colonial societies, slavery and colonial occupation. But the thrust of Keith Somerville’s narrative looks at Africa in the closing decades of the old millennium and the beginning of the new millennium. While this book examines post-colonial conflicts within and between new states, it also considers the history of the peoples of Africa — their struggle for economic development in the context of harsh local environments and the economic straitjacket into which they were strapped by colonial rule is charted in detail. The importance of imposed or inherited structures, whether the global capitalist system, of which Africa is a subordinate part, or the artificial and often inappropriate state borders and political systems set up by colonial powers, will be examined in the light of the exercise of agency by African peoples, political movements and leaders.