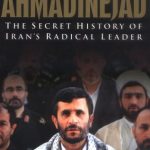 When Ahmadinejad was elected President in June 2005, anxiety replaced election fever amongst many Iranians. To let off steam they told jokes. ‘Why did the new President part his hair so straight? To segregate the male and female lice.’ But while the laughter died down, the anxiety never went away… As Iran s nuclear programme accelerates, all eyes are on the blacksmith s son who could have his finger on the trigger. Who is Mahmoud Ahmadinejad? What drives him? What formed him? To whom, if anyone, does he answer? Internationally acclaimed journalist Kasra Naji, a native Persian speaker, has spent years in Iran interviewing friends, family and colleagues of the firebrand President to tell for the first time the true story of how he came to power. A picture emerges far more compelling than any of the caricatures offered up so far. While Naji documents the often strange behaviour of Ahmadinejad, with his visions of the Hidden Imam and diatribes against Israel, he also shows him to be full of contradictions: a strange and complex man, at once gripped by apocalyptic beliefs, yet capable of switching spiritual allegiance in the quest for power. A man tough enough to fight street battles in the name of Ayatollah Khomeini during the revolution, who was described by former army comrades as a coward. A man crude enough to invite the German Chancellor to join him in an anti-Jewish alliance, yet sophisticated enough to win the political support of the all-powerful Revolutionary Guard. The unknown Ahmadinejad – revealed here by Naji – is much more of a force to be reckoned with than the bogeyman conjured up by Washington. Naji takes us inside the shadowy council chambers of Tehran, and shows us the plots, passions and personalities that will influence Ahmadinejad’s next move, while the world waits with baited breath.