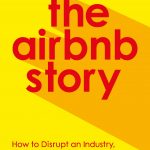 ‘fast paced, fun dive into one of the seminal firms of our time’ — Rana Foroohar

In 2008, two broke art school graduates and their coder-whiz friend set up a platform that – in less than a decade – became one of the largest provider of accommodations in the world. Now valued at $31 billion, Airbnb is in the very top tier of Silicon Valley’s ‘unicorn’ startups.

Yet the company has not been without controversy – disrupting a $500 billion hotel industry makes you a few enemies. This is also a story of regulators who want to shut it down, hotel industry leaders who want it to disappear and neighbourhoods that struggle with private homes open for public rental. But beyond the headlines and the horror stories, Airbnb has changed the terms of travel for a whole generation – where a sense of belonging has built trust between hosts and guests seeking a more original travel experience that hotels have struggled to replicate.

This is the first, definitive book to tell the remarkable story behind Airbnb in all its forms – cultural zeitgeist, hotel disruptor, enemy to regulators – and the first in-depth character study of its leader Brian Chesky, the company’s curious co-founder and CEO. It reveals what got Airbnb where it is today, why they are nothing like Uber, and where they are going next.