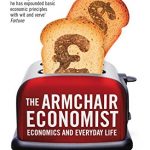 Air bags cause accidents, because well-protected drivers take more risks. This well-documented truth comes as a surprise to most people, but not to economists, who have learned to take seriously the proposition that people respond to incentives.

In The Armchair Economist, Steven E. Landsburg shows how the laws of economics reveal themselves in everyday experience and illuminate the entire range of human behavior. Why does popcorn cost so much at the cinema? The ‘obvious’ answer is that the owner has a monopoly, but if that were the whole story, there would also be a monopoly price to use the toilet. When a sudden frost destroys much of the Florida orange crop and prices skyrocket, journalists point to the ‘obvious’ exercise of monopoly power. Economists see just the opposite: If growers had monopoly power, they’d have raised prices before the frost.

Why don’t concert promoters raise ticket prices even when they are sure they will sell out months in advance? Why are some goods sold at auction and others at pre-announced prices? Why do boxes at the football sell out before the standard seats do? Why are bank buildings fancier than supermarkets? Why do corporations confer huge pensions on failed executives? Why don’t firms require workers to buy their jobs? Landsburg explains why the obvious answers are wrong, reveals better answers, and illuminates the fundamental laws of human behavior along the way.

This is a book of surprises: a guided tour of the familiar, filtered through a decidedly unfamiliar lens. This is economics for the sheer intellectual joy of it.