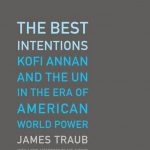 During his first term as secretary-general of the United Nations, Kofi Annan was one of the most widely admired men in the world. In 2001, he won the Nobel Peace Prize. Then the UN failed to stop war in Iraq and genocide in Darfur, and the institution was engulfed by the Oil-for-Food scandal. By the time Annan left office in December 2006, both he and the UN had suffered a terrible loss of standing.

Did the UN’s failures arise from its own structure and culture or from a clash with an American administration determined to go its own way in defiance of world opinion?

In The Best Intentions, New York Times Magazine writer James Traub traces the entwined histories of Kofi Annan and the UN from 1992 to the present, and offers a definitive portrait of the institution’s role in the age of American dominance.