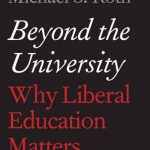 BEYOND THE UNIVERSITY. WHY LIBERAL EDUCATION MATTERS

BEYOND THE UNIVERSITY. WHY LIBERAL EDUCATION MATTERS

An eloquent defense of liberal education, seen against the backdrop of its contested history in America Contentious debates over the benefits-or drawbacks-of a liberal education are as old as America itself. From Benjamin Franklin to the Internet pundits, critics of higher education have attacked its irrelevance and elitism-often calling for more vocational instruction. Thomas Jefferson, by contrast, believed that nurturing a student’s capacity for lifelong learning was useful for science and commerce while also being essential for democracy. In this provocative contribution to the disputes, university president Michael S. Roth focuses on important moments and seminal thinkers in America’s long-running argument over vocational vs. liberal education. Conflicting streams of thought flow through American intellectual history: W. E. B. DuBois’s humanistic principles of pedagogy for newly emancipated slaves developed in opposition to Booker T. Washington’s educational utilitarianism, for example. Jane Addams’s emphasis on the cultivation of empathy and John Dewey’s calls for education as civic engagement were rejected as impractical by those who aimed to train students for particular economic tasks. Roth explores these arguments (and more), considers the state of higher education today, and concludes with a stirring plea for the kind of education that has, since the founding of the nation, cultivated individual freedom, promulgated civic virtue, and instilled hope for the future.