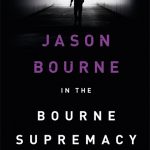 Scrawled in a pool of blood is one name the world wanted to forget – Jason Bourne…The second, brilliant Bourne novel from worldwide bestselling author Robert Ludlum.
Jason Bourne is back in the forthcoming major motion picture starring Matt Damon and Alicia Vikander. Go back to where it all began for Bourne in his original adventures.

Washington, Hong Kong and Peking – terror sweeps the globe. The Vice-Premier of the People’s Republic has been brutally murdered by a legendary assassin, and everyone is asking the same fearful questions: why has Bourne come back? Who is paying him? Who is next on his death list? But US officials know the shocking truth: there is no Jason Bourne. There never was. But someone has resurrected the name, and if he is not stopped, the world will pay a devastating price.

Jason Bourne must live again. He must utilise his murderous skills. But this time the will to survive is not enough. This time Bourne must reign supreme…