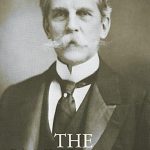 Oliver Wendell Holmes, Jr. (1841–1935) is generally considered one of the two greatest justices of the United States Supreme Court, Chief Justice John Marshall being the other. In more than 2000 opinions, he delineated an impressive legal philosophy that profoundly influenced American jurisprudence, particularly in the area of civil liberties and judicial restraint. At the same time, his abilities as a prose stylist earned him a position among the literary elite.
In The Common Law, derived from a series of lectures