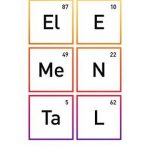 The Universe came into being 13.8 billion years ago. At this point, all of existence could be summed up as an endless soup of particles frothing at temperatures many times hotter than the Sun. It was chaos. Fortunately, as the Universe expanded, everything began to cool and the particles stabilised. It was around this time, as disorder gave way to order, that the elements were born. Fast forward to June 2016 and the periodic table of elements was finally completed with the discovery and addition of four new elements. At last we could identify all the ingredients necessary to make a world. But it doesn’t stop there. Human ingenuity knows no bounds; we have even begun to invent our own elements and have created an entire science devoted to their study: chemistry.

When it comes to chemistry, Tim James knows his stuff. In Elemental he tells the story of the periodic table from its ancient Greek roots, when you could count the number of elements humans were aware of on one hand, to the modern alchemists of the twentieth and twenty-first centuries, who have used nuclear chemistry and physics to generate new elements and complete the periodic table. In addition to this, James answers questions such as:

What is the chemical symbol for a human?

What would happen if all of the elements were mixed together?

How many bananas can you stand next to before you die of radiation sickness?

Which liquid can teleport through walls?

Why is the medieval dream of transmuting lead into gold now a reality?