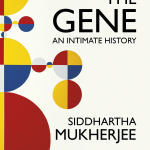 Selected as a Book of the Year by The New York Times, The Economist, Independent, Observer and Mail on Sunday

‘Dramatic and precise… [A] thrilling and comprehensive account of what seems certain to be the most radical, controversial and, to borrow from the subtitle, intimate science of our time… He is a natural storyteller… A page-turner… Read this book and steel yourself for what comes next’
Bryan Appleyard, Sunday Times

The Gene is the story of one of the most powerful and dangerous ideas in our history, from bestselling, prize-winning author Siddhartha Mukherjee.

Spanning the globe and several centuries, The Gene is the story of the quest to decipher the master-code that makes and defines humans, that governs our form and function.

This is an epic, moving history of a scientific idea coming to life, by the author of The Emperor of All Maladies. But woven through The Gene, like a red line, is also an intimate history – the story of Mukherjee’s own family and its recurring pattern of mental illness, reminding us that genetics is vitally relevant to everyday lives. These concerns reverberate even more urgently today as we learn to “read” and “write” the human genome – unleashing the potential to change the fates and identities of our children.

The story of the gene begins in an obscure Augustinian abbey in Moravia in 1856 where a monk stumbles on the idea of a ‘unit of heredity’. It intersects with Darwin’s theory of evolution, and collides with the horrors of Nazi eugenics in the 1940s. The gene transforms post-war biology. It reorganizes our understanding of sexuality, temperament, choice and free will. This is a story driven by human ingenuity and obsessive minds – from Charles Darwin and Gregor Mendel to Francis Crick, James Watson and Rosalind Franklin, and the thousands of scientists still working to understand the code of codes.

Majestic in its ambition, and unflinching in its honesty, The Gene gives us a definitive account of the fundamental unit of heredity – and a vision of both humanity’s past and future.