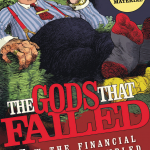 Gods That Failed, The

Gods That Failed, The

You have been had.

MARKETS ARE NOT MAGIC.
DEBT IS NOT FREEDOM.
THE GODS HAVE FAILED.

A risk-prone, privatised profit-driven economic model overseen by a largely unaccountable, greedy and arrogant elite has resulted in one of the worst financial crises in history.

The over-paid heroes of Wall Street and the City worshipped the gods of globalisation, financialisation and speculation, and during the years of economic growth we, and our governments, worshipped them too. But high in the boardrooms of Mount Olympus, the reckless lust of banks for big bonuses and bigger profits led to excesses that have proved unsupportable.

The warning signs were ignored – now the Masters of the Universe are toppling and we’re footing the bill.

Find out how an unregulated elite were able to run riot with your cash, and find out how to stop it happening again.