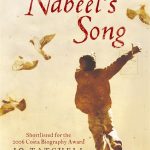 Nabeel Yasin had an ordinary childhood, in a middle-class neighbourhood in 1950s Baghdad. He showed an early gift for poetry and as a young man became famous for it. But by the end of the 1970s Saddam’s rise to power was encroaching on his life, and that of his family. Nabeel’s brothers were arrested and he himself was denounced as an enemy of the state and fled Iraq in 1980.

NABEEL’S SONG tells his story, and that of the family that he left behind; his matriarch of a mother Sabria, his four brothers and their rebellion against Saddam’s regime, and his two sisters – all ordinary people living in extraordinary and difficult times. This is a moving family story of exile and endurance.

‘Jo Tatchell’s moving narrative, from Nabeel’s mouth, tells of endurance, literary resistance and the courage of a loving, close-knit family opporessed by tyranny and war’ The Times