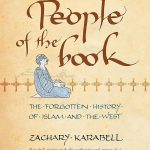 PEOPLE OF THE BOOK, THE

PEOPLE OF THE BOOK, THE

We live in a world polarized by the ongoing conflict between Muslims, Christians and Jews, but – in an extraordinary narrative spanning fourteen centuries – Zachary Karabell argues that the relationship between Islam and the West has never been simply one of animosity and competition, but has also comprised long periods of cooperation and coexistence.

Through a rich tapestry of stories and a compelling cast of characters, People of the Book uncovers known history, and forgotten history, as Karabell takes the reader on an extraordinary journey through the Arab and Ottoman empires, the Crusades and the Catholic Reconquista and into the modern era, as he examines the vibrant examples of discord and concord that have existed between these monotheistic faiths.

By historical standards, today’s fissure between Islam and the West is not exceptional, but because of weapons of mass destruction, that fissure has the potential to undo us more than ever before. This is reason enough to look back and remember that Christians, Jews and Muslims have lived constructively with one another. They have fought and taught each other, and they have learned from one another. Retrieving this forgotten history is a vital ingredient to a more stable, secure world.