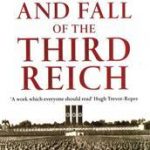 Rise and Fall of the Third Reich, The

Rise and Fall of the Third Reich, The

It was Hitler’s boast that the Third Reich would last a thousand years. Instead it lasted only twelve. But into its short life was packed the most cataclysmic series of events that Western civilisation has ever known.

William Shirer is one of the very few historians to have gained full access to the secret German archives which the Allies captured intact. He was also present at the Nuremberg trials. This is his authoritative historical account of the years 1933-45, when the Nazis, under the rule of their desporic leader Adolf Hitler, ruled Germany. They commandeered the Holocaust, one of the most shocking acts of evil in modern history, plunged the world into a second war, and changed the face of modern history and modern Europe forever.