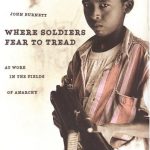 WHERE SOLDIERS FEAR TO TREAD

WHERE SOLDIERS FEAR TO TREAD

“If you’ve ever sent 20 bucks off to a relief organization, you owe it to yourself to read this book.” Michael Maren The Road to Hell: The Ravaging Effects of Foreign Aid and International Charity. “There is going to be shooting here and it is a toss-up who is going to get the boy’s first round. The soldier, about ten-years-old, is jamming the barrel of his gun hard against my driver’s face and unless the kid decides to go for me, the relief worker, my driver is going to get his head blown off.” In 1998 John Burnett left the comforts of the mainstream and became a UN relief worker. On the lookout for adventure and willing to take a risk, Burnett was nevertheless completely unprepared for the realities of working in a country without government or law where the only authority that matters comes from a loaded gun. From his lack of proper tools and communication gear to the tragedy of watching a baby die of malaria in his arms and the gut-wrenching terror of being held up at gunpoint by a child soldier, the experience of being an aid-worker drastically changed the way he sees the world. It also shocked him profoundly to realize the casualness with which unarmed and untrained civilians were sent into literally explosive situations to try to help, and to understand how even the distribution of aid in the face of catastrophe can be seen as a political act.