Binyavanga Wainaina:The man who was possible

The first time I met Binyavanga Wainaina was in 2018. I was working on a piece about Kwani, and so I had a list of things I wanted to ask him about. I had been talking to Yvonne Owuor before this, and she warned me that Binyavanga was not in the best of states, and that I might be shocked by what I saw. With this in mind, a friend of mine and I drove to Binyavanga’s house.

The interview was a disaster. A combination of my own nervousness and Binyavanga’s speech difficulties meant that I didn’t get the answers I was looking for. I would ask something and Binyavanga would want to answer it, would communicate with his body his excitement at what I was asking, but then the more excited he got, the harder it seemed to be for him to verbalize his thoughts. Or I would ask, and he would respond with a No, and look at me, waiting for my next question.

We abandoned the interview. Instead, we just talked. I was writing about cricket at the time, specifically the period leading up to the 2003 ICC World Cup, and I told him about it. Binya had written about this World Cup for The East African, and he grew animated as he talked about being in Nairobi during this period. Odumbe or Tikolo?, I asked him. Odumbe, he said. Meja Mwangi or Ngugi? Ngugi, he said. The important questions. He told me about how important Kojo Laing’s Search Sweet Country had been to his development both as a writer and as a person. He told me that he and Chimamanda had been engaged to be married. Later, i would question whether this was true or he had intended to shock me, but, in all honesty, it didn’t matter. It was a story and Binya was a storyteller and I liked it.

A thing I do with writers whose work I respect is to form a mental image of them. In my head, Binyavanga was taller than me, bigger than me. In things I had read about him, he was always the powerful presence who filled the room with his vibrancy. This is not the Binyavanga I met. The Binyavanga I met let me dominate the room in a way that I felt guilty about. His illness had clearly affected him, and Yvonne’s warning echoed in my mind.

Because of my age, sometimes I find myself playing catch-up with a lot of things that happen in the Kenyan literary scene. Kwani is one of these things. I was in nursery school when conversations about it were being had, but, more importantly, I never saw a Nairobi literary scene which was dominated by Kwani. Friends would tell me about going to Kwani parties at Riverside, and the feeling of in-ness they got by being in such close proximity with all these important writers who were part of the Kwani crowd. Binyavanga did not found Kwani, neither was he the founding editor. Kwani was the result of long conversations between a large group of people, communicating over a period of time. Instead, as Yvonne would tell me, he provided a lot of the drive and energy that was necessary to make things possible, pushing people to do things, emailing people, calling people, lighting fires. In his memoir, One Day I Will Write About This Place, Binyavanga offers a riposte: We fail to remember that we were possible from the very beginning. Kwani, as Parselelo Kantai writes, not only wanted to showcase emergent literary talent, but also to explore the different ways of being Kenyan, and Binyavanga was a huge pillar in making this possible.

When I got home from the interview, i would tell Yvonne that i had pushed too hard, asked too much, and that Binya had shut me out. Well, that’s that for that, I thought to myself. Only it wasn’t. The next morning, I would wake up to a friend request from Binyavanga on Facebook. Isaac Otidi Amuke would tell me that my visit had excited him. A week later, Binya would call, offering me a job. He was getting back into writing, he said, and needed someone around him, a proto-assistant, but also someone he could bounce ideas onto and talk about writing with.

Thomas Glave, in writing about Audre Lorde, cautions against worshipping our heroes. He writes, “I wonder now if some of our wholesale embracing of Lorde-as-Goddess – and the fetishizing, romanticizing, deifying, and mythicizing of Lorde that continues today – has much to do with a great many of us (black queer people in particular) coming of age in a generation before which there simply had been extremely few visible models of such political bravery.” Perhaps this is what happens with Binyavanga. That, to many, Kwani is conflated with Binyavanga. That because he provided the only visible model of a literary career that wasn’t Ngugi, he becomes Binyavanga THE BINYAVANGA.

Billy Kahora mentions Binyavanga’s trail of damaged relationships, saying, “And so he made so many enemies, particularly with those who he found on the literary and cultural scene who had attained status the old fashioned Kenyan way, through networks of privilege and informal social circuit.” Yvonne warns me about the patience necessary to maintain a relationship with Binyavanga. More darkly, accusations of sexual abuse are laid against him by members of Nairobi’s queer community, accusations that are often swept under the rug.

Stll, Binyavanga and Kwani, Binyavanga and writing. Isaac tells me how Binyavanga made writing possible for him, not necessarily by introducing him to important people, but by making him believe that he, Isaac, could write, and make a career out of it. Yvonne calls Binyavanga a darling brother, talking about how he pushed her to write both Dust and “Weight of Whispers”, saying she owes a second life to him. And all the other writers whose literary careers Binyavanga helped mold. Akwaeke Emezi. A Igoni Barrett. The idea for Africa 39. “How to Write About Africa” and “How Not to Write About Africa”. Not only the Kenyans, Binya, but across the continent, Binya.

Binyavanga never published a novel. For many members who were part of Kwani at its start, the group Parselelo calls the Redykyulass Generation, the lack of novels is a steady regret. Binyavanga, according to Parselelo, was a perfectionist, but also very ambitious with what he wanted to do with his novel, and that these two sides never meshed together stung him. Is this important, this lack of a novel? Maybe. Maybe not. These are not the things we think about now.

Instead, here is something I choose to think to about. My friend Kasichana texts me, asking me to hug Neo Musangi, who was one of Binyavanga’s closest friends. And I echo her message. Neo. Isaac. Yvonne. Andia Kisia. Parselelo. His family. His friends. The network of people to whom the photos Binyavanga would post on his Whatsapp status celebrating his good days are gone. Hug them. Hug them all. Grieve with them.

Binyavanga is more than the sum of the postscripts that have been, and will be, published in the immediate aftermath of his death. Right now, in this temporal space, the hurt supersedes all else, making it difficult for us to write fully about what he meant to the Kenyan literary space, and to the African literary space. One day we will write about this place, but not now; Now, we mourn.

Does Kwani still exist? I don’t know. But Binyavanga is dead and everything is worse now.

Here’s to (Kenneth) Binyavanga Wainaina, the man who was possible for the very beginning. 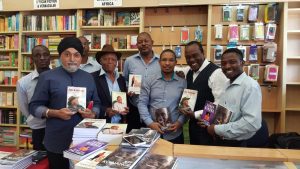 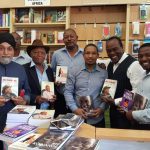