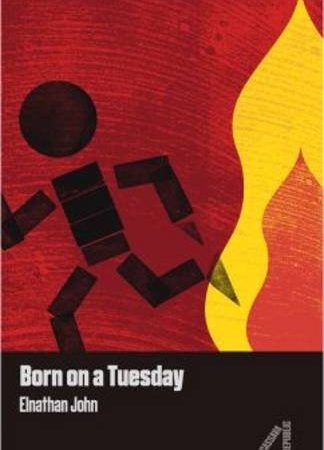 Born on a Tuesday: A Review

Here is a young Hausa boy who has found a place to call home at the mosque near the motor park, in Sokoto. Where else can he call home when his parents are dead, and his brothers have joined the Shiites? When the reader meets Dantala he has just finished studying under his Quranic teacher  Malam Junaidu in Bayan Layi and is preparing to go back home. Instead, he joins the boys who hang out under the kuka tree; a decision that sets him on a journey filled with true friendship, love, and painful revelations about his religion and his country at large.

Puberty has never been kind to any of us and Dantala does not escape this mortifying experience either. Suddenly he finds that he cannot stop thinking about Aisha; a touch on his shoulder by Malam Abdul Nur arouses him; and Jibril escorts him to his first hilarious sexual encounter. He lets the reader in on these moments by keeping a journal where he documents his thoughts. It is on this journal ,too, that he writes new English words that he learns from Jibril in exchange for teaching him Arabic. It is puzzling for him how different the English language is from Hausa. These moments of laughter contrast deeply with what is happening in Dantala’s world.

There is a war among the different sects in Islam. One of his teachers at the mosque has joined the Mujahideen, a sect that is terrorizing his country and has declared war on the Shias and the Dariqas. Dantala is alarmed at how people could cause harm to others in the name of Islam: “But there are people that even if every thing is in the Quran, they will still bring their own thinking into it and cause fighting.” He finds himself, and consequently so does the reader, at the centre of this conflict within the muslim community. It is an ordeal that leads him to captivity, where his loyalty to his dear friend Jibril is painfully tested.

Though bearing heavy concerns, this is a tale told with humour, light heartedness, and sincere affection for human life. It is a delightful page turner.

Hiding in Plain Sight: A Review
Conversation with Elnathan