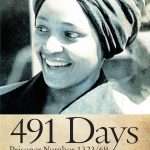 On a freezing winter’s night, a few hours before dawn on May 12, 1969, South African security police stormed the Soweto home of Winnie Madikizela-Mandela, activist and wife of the imprisoned Nelson Mandela, and arrested her in the presence of her two young daughters, then aged nine and ten.

Rounded up in a group of other antiapartheid activists under Section 6 of the Terrorism Act, designed for the security police to hold and interrogate people for as long as they wanted, she was taken away. She had no idea where they were taking her or what would happen to her children. For Winnie Mandela, this was the start of 491 days of detention and two trials.