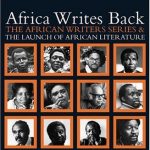 Africa Writes Back was published in 2008 to coincide with the 50th anniversary of the publication of Chinua Achebe’s Things Fall Apart – the novel which provided the impetus for the foundation of the Heinemann African Writers Series in 1962 with Chinua Achebe as the Editorial Adviser. With the 50th anniversary of the AWS being celebrated in 2012, James Currey’s book has a new resonance.
‘… not only the story of a publishing enterprise of great significance; it is also a large part of the story of African literature and its dissemination in the latter half of the twentieth century. The manuscript is full of the drama of that enterprise, the drama of dealing with the mother house, William Heinemann, of dealing with the often intractable political constraints dominating the intellectual space across Africa, and not least of all dealing with the writers themselves – with their ambitions, their temperaments, their financial needs and, at time, their perception of a colonial relationship between themselves and a European publishing house.’ – Clive Wake, Emeritus Professor of Modern Languages, University of Kent at Canterbury.