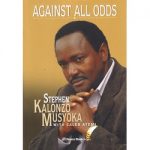 Stephen Kalonzo Musyoka became Kenya’s youngest Member of Parliament when he was first elected in 1985 at the age of 31. He went on to serve in public office for 28 uninterrupted years until March,2013 when his coalition lost the elections.
Against All Odds documents his crucial role as a peacemaker from his early days in school and later his impact on the Sudan and Somalia peace negotiations.
His candid about his fears, anxieties and the nerve-wracking intricacies of Kenyan public life. This is the story of a man determined to walk the straight and narrow path of truth, honesty and integrity.