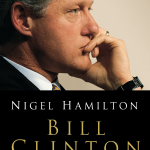 Nigel Hamilton’s account of Bill Clinton’s early life and career – Bill Clinton: An American Journey – drew widespread praise. Now, in Bill Clinton: Mastering the Presidency, Nigel Hamilton charts the experience of the 42nd President as he took presidential oath of office- and how he fared therafter in the piranha pool of Washington D.C.

Hamilton charts what was possibly the greatest disaster and re-reinvention of a president in office in modern times. How Bill Clinton faced up to his failures, and refashioned himself in the White House is an epic story. With a thriving U.S. economy and hard-won wisdom in international affairs and in combating the rise of terrorism, Clinton would begin his second term as the undisputed, immensely popular leader of the Western world – aware, however, that terrors ant treason within America loomed as large as dangers abroad.

Insightful, balanced, prodigiously researched and a joy to read, Bill Clinton: Mastering the Presidency is set to become, alongside its prequel, the classic story of Clinton’s extraordinary effort to be a modern president, in a modern world-and a chronicle one of the most extraordinary reversals of fortune in modern American politics.